Rirkrit Tiravanija’s diverse artistic production eludes classification, he has accurately described it as “relational”: a body work focused on real-time experience and exchange that breaks down the barriers between the object and the spectator while questioning the art object as fetish, and the sacredness of the gallery and museum display. Tiravanija’s work first came to public awareness in a 1989 New York gallery through untitled (), which consisted of weekly renewed displays of the various stages of a green curry meal: a pedestal for ingredients, a pedestal for curry cooking on a burner, and a pedestal with waste products. In 1992, he continued to push and question the possibilities and principles of the gallery space in untitled (free), in which he emptied out an art gallery and turned it into a social/meeting space where he cooked large meals for visitors; and in untitled (1999), an exact replica of his East Village apartment where people were invited to live in. Tiravanija has also described his work as: “comparable to reaching out, removing Marcel Duchamp’s urinal from its pedestal, reinstalling it back on the wall, and then, in an act of returning it to its original use, pissing in it.” Tiravanija is interested in subverting deeply-ingrained ways of interacting with art through novel forms of collaboration and exchange that diminish the preciousness of objects reconsidering their lifecycle and function while remaining accessible to a broad public.

Tiravanija is an Argentina born Thai artist who lives between New York, Berlin, and Chiang Mai and his work carries strains of this nomadic existence, blending and re-combining different cultural contexts. Rather than insisting on a particular reality or truth, his work creates open-ended contexts for people to grapple with these questions themselves. The strength of Tiravanija’s work lies precisely in its ephemerality and the slippery ways it escapes definition; he takes the material of the every-day and re-stages it, allowing the viewer a perspective at once banal and deeply profound about the quickly fleeting nature of life itself.

Tiravanija received his BA from the Ontario College of Art and Design in 1984 and his MFA from the School of the Art Institute of Chicago in 1986. From 1985-1986, he participated in the Whitney Independent Study Program. He has received numerous grants and awards, including the Absolut Art Award 2010, the Silpathorn Award by the Ministry of Culture in Thailand (2017), Hugo Boss Prize (2004), and Lucelia Artist Award by the Smithsonian American Art Museum (2003),  among others. 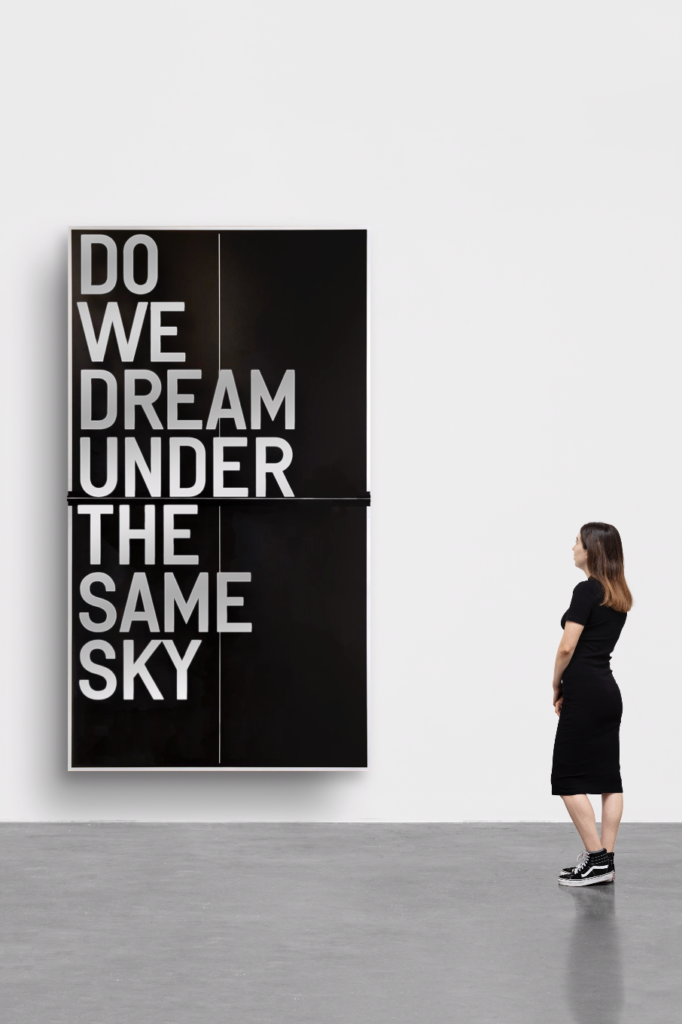 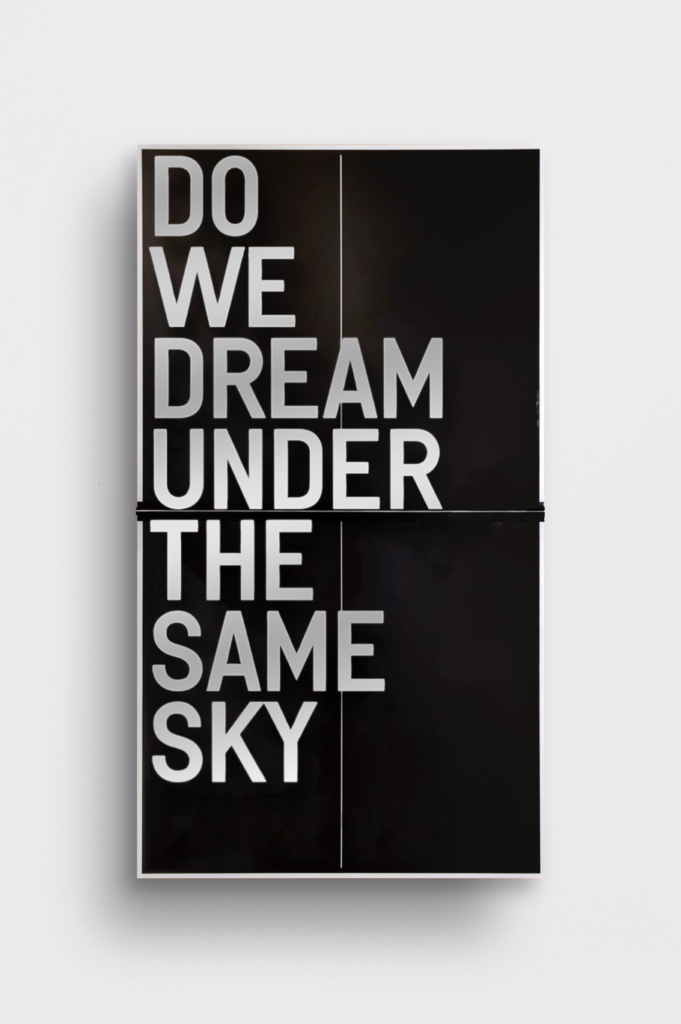 untitled 2021 (do we dream under the same sky), 2021
Silver silkscreen on ping pong table
107.87 x 66.54 x 7.87 inches
$85,000 USD
Rirkrit Tiravanija often questions the format of the artworks and the exhibition system. A mix of performances, sculptures, installations, he transforms the artistic space into a place of social interaction, often dotted with meeting points, encounters and exchanges. 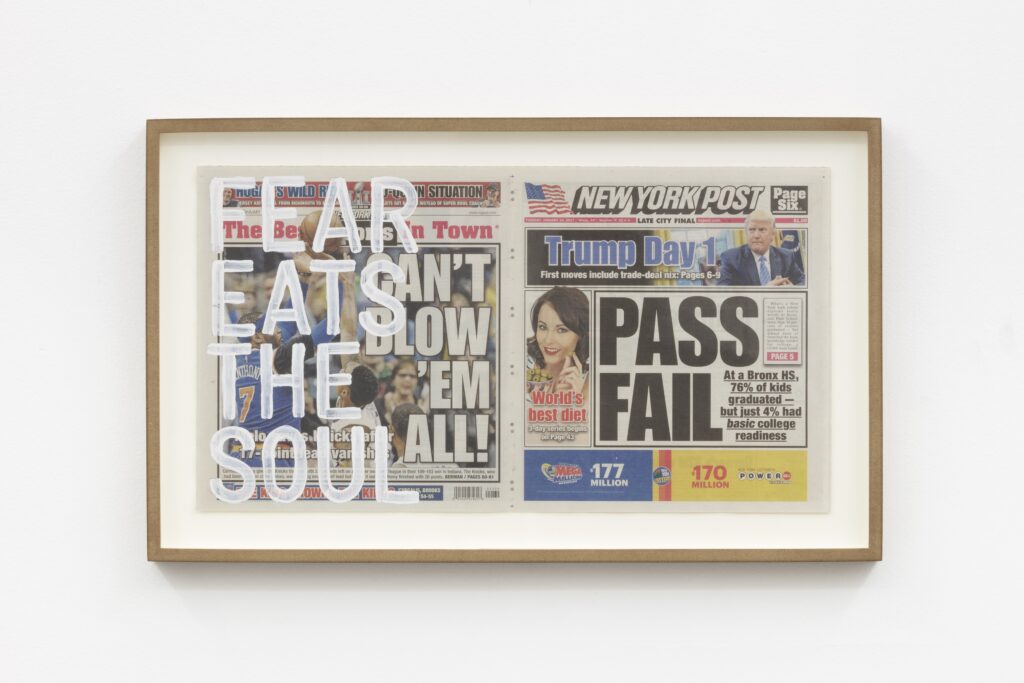 With its complex wit, philosophical reach and radically restricted means, Rirkrit Tiravanija’s work engages the personal and historical consciousness of place and time. In this new body of work, Tiravanija uses broadsheets of widely read and liberal newspapers.The artist has chosen one day: January 20th 2017, in which Donald J. Trump was inaugurated as the President of the United States. Here, the artist’s semiographic response to coverage of this is laid out across part of the newspaper’s front page. The motto, FEAR EATS THE SOUL, echoes the demands written on the many protester’s banners and continues Tiravanija’s research on notions of collectivity, exchange and experience, best exemplified by his own socially minded, ephemeral events. Beyond this, Tiravanija’s new body of work evokes the idea that some dates become widely accepted as belonging to collective memory, moments marked by events that, when raised as a topic of conversation, seem almost to demand an exchange of personal recollections. 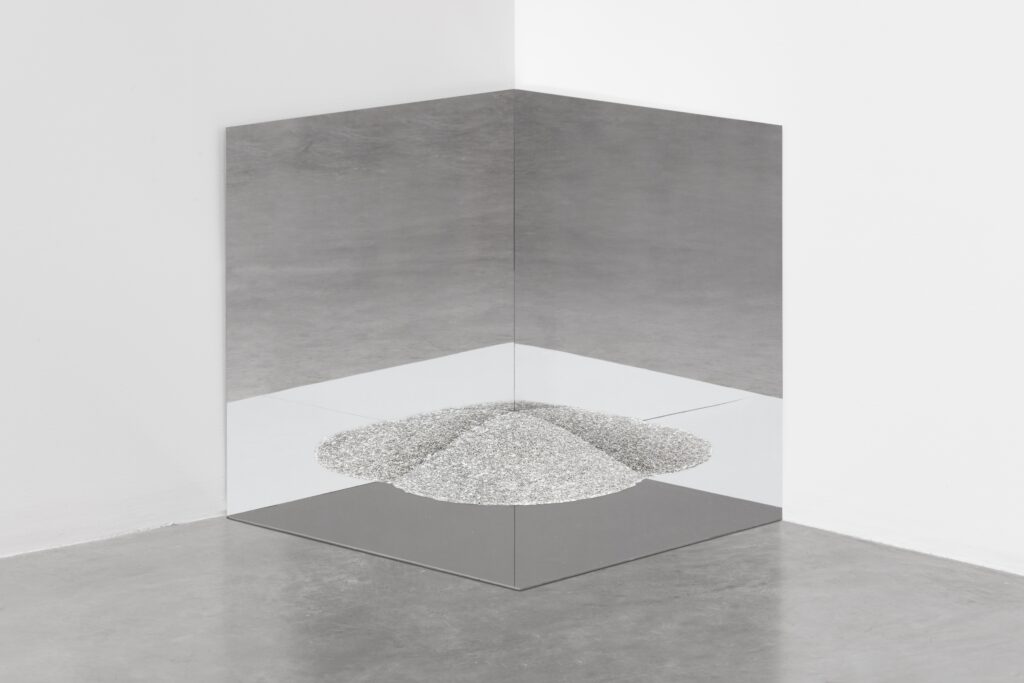 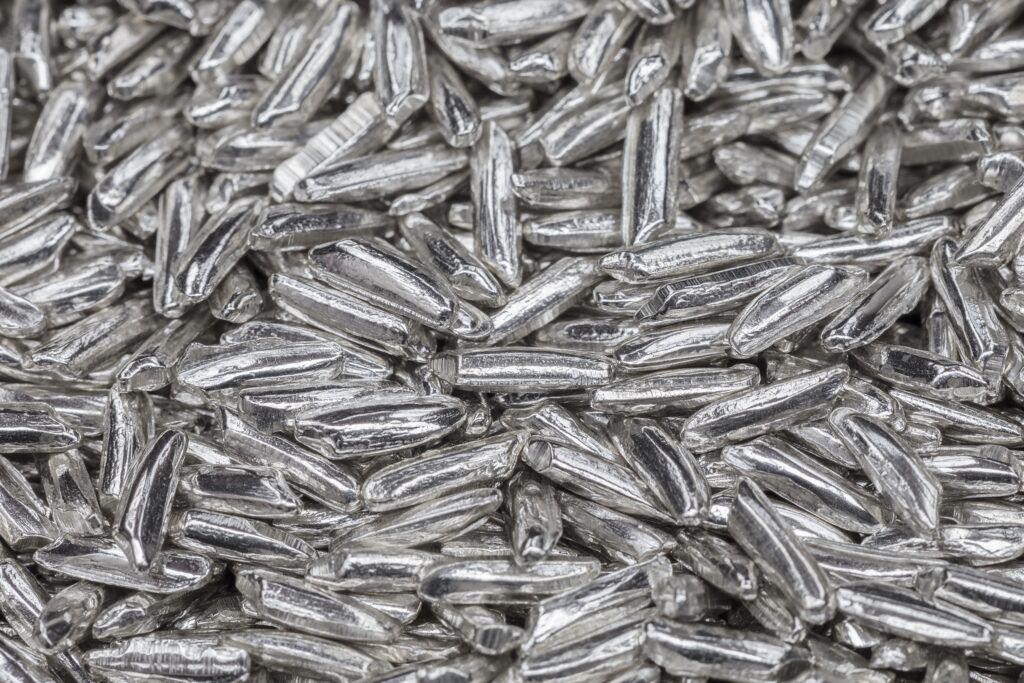 In untitled 2017 (1 kilo of rice) (2017) and untitled 2018 (1.5 kilos of rice) (one), 2018 Rirkrit Tiravanija arranges silver rice to a point that it reaches extreme abstraction and is erased of its original function. By reversing expectations through a presentation of the unexpected, the unfamiliar and the unknown, untitled 2017 (1 kilo of rice) offers both revelation and a challenge to the preconceptions of rice as a medium. What was once a cheap, mass produced food product is now an entirely refigured, precious material. Exploring a similar idea, rice as a meditative medium was also explored by the artist in the conceptual works Untitled (family of four), 2006, Untitled (only two cups of rice) (2006) and Untitled 2009 (2 kilos) (2009). 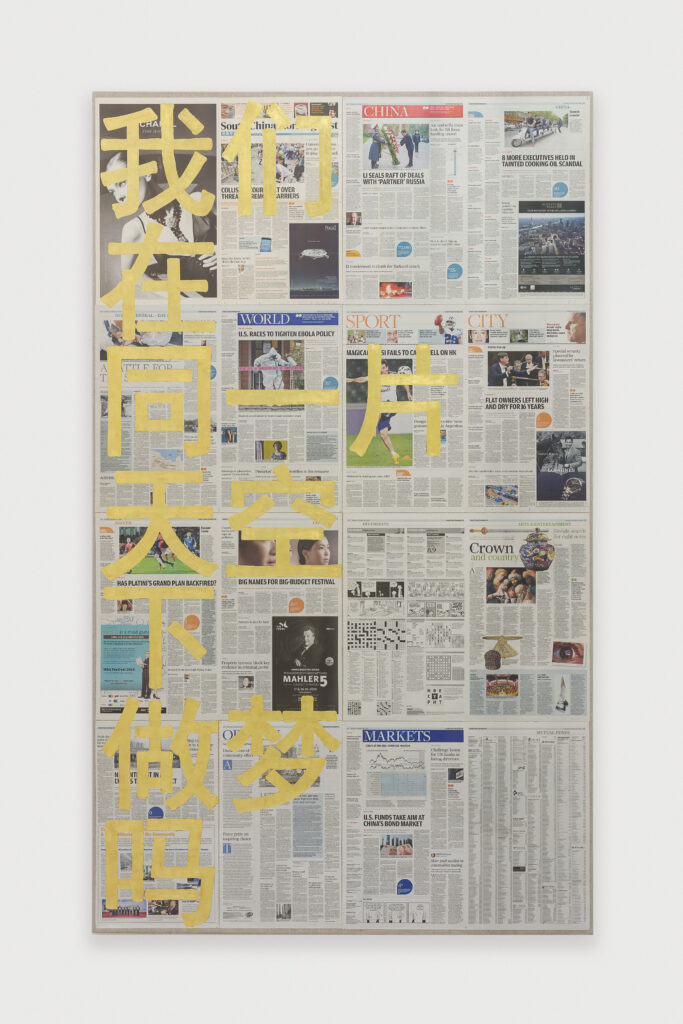 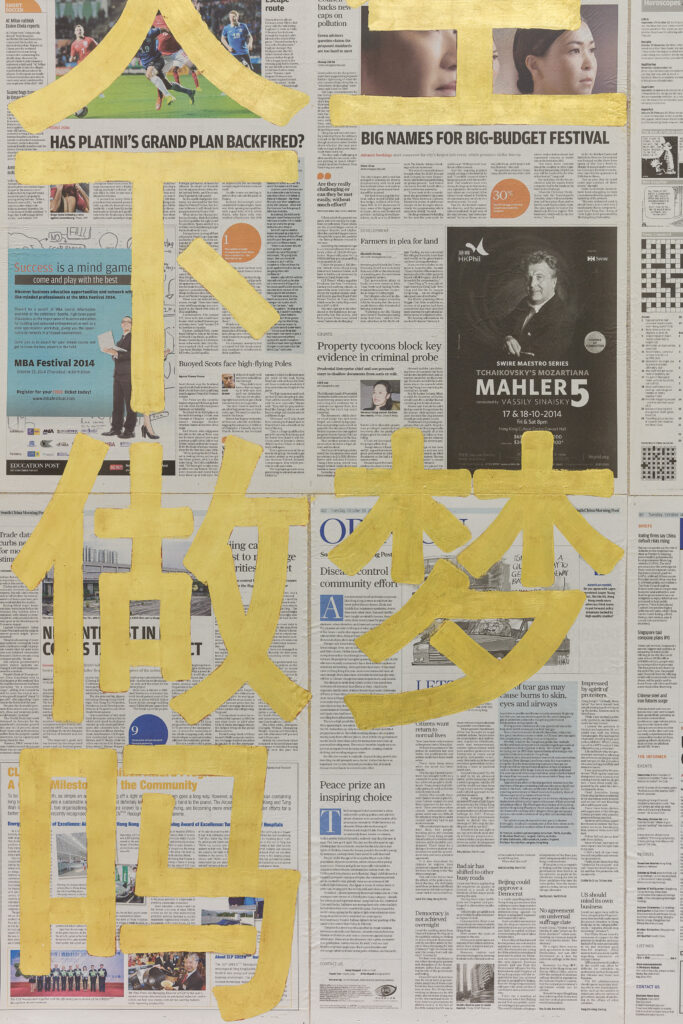 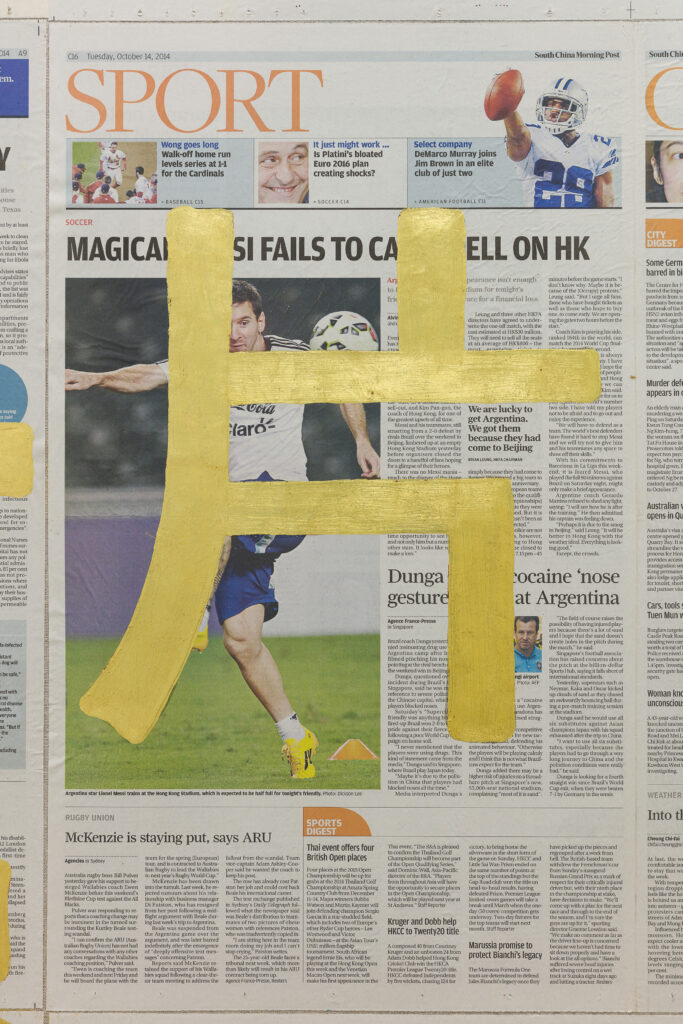 Rirkrit Tiravanija often questions the format of the artworks and the exhibition system. A mix of performances, sculptures, installations, he transforms the artistic space into a place of social interaction, often dotted with meeting points, encounters and exchanges. Frequently immaterial, his work invents new connections in a world based on reciprocity, conviviality and hospitality. Following this lead, untitled 2018, translating into English as, ‘do we dream under the same sky,’ echoes Tiravanija’s research on notions of collectivity, exchange and experience. Exemplified best by his own socially minded, ephemeral events, untitled 2018 references Do We Dream Under The Same Sky, an installation conceived as an outdoor shelter made of modular bamboo and steel and comprised of an open-air kitchen, a herbal garden and a communal dining area. Visitors ate, drank and relaxed in a convivial atmosphere, while engaging in discussions and investigations about practices of sustainability, the geopolitics of food, and building technologies in the era of the Anthropocene. This experiential concept now exists here in the medium of a painting.
Contact
Instagram
Website