An outgrowth of Kenneth Tam’s research into the history of diasporic Asians in the United States, Silent Spikes, on view at the Queens Museum through June 2021, interrogates Asian-American masculinity through video and sculpture in an immersive installation. For 8-bridges, the artist has produced a single-channel version of the film. The below video is an excerpt; please contact for full version.

Probing the intersections of gender, economics, and race, the work draws on the historical relationships of cowboy culture, idea(l)s of Manifest Destiny, the remaking of the American West through conquest and colonialism, migration histories, the mass propagation of stereotypes in Hollywood cinema—particularly in Western films—and contemporary experiences of Asian-American males.

Over 20,000 Chinese men worked on the construction of the treacherous western portion of the Transcontinental Railroad, which celebrated its 150th anniversary last year. Silent Spikes draws connections between the recruitment of Chinese male bodies that were both necessary and productive members of this workforce and heavily discriminated against, and the experiences of young Asian-American men in the insecure conditions of the post-industrial labor force​.​ These new works consider the homogenized construct of Asian-American identity alongside the paradigm of Anglo-American individualistic maleness. Tam integrates his own relationship to the latter’s imagery, most notably embodied by the Marlboro Man. It is as if Tam asks, can an Asian man truly inhabit or embody the touchstones of (white) American masculinity and its attendant freedom?

The eponymous video component of Silent Spikes employs local participants as performers, scripted and directed by Tam. In previous works Tam solicited performers from Craigslist; Silent Spikes seeks a relationship with its participants, sourced from Asian-American communities in Flushing, Queens. The performers interact with each other and with props from cowboy standbys (caressing a green plastic cowhead, mounted on a featureless mechanical bull)  rendered incongruous and strange by the vacant, misty backdrop of a stage set. There is an awkwardness to these sequences, seeing grown contemporary men in cowboy drag, a self-awareness and self-consciousness revealed by their confrontation with histories of exploitation and erasure.

Transgressing boundaries of gendered and racialized labor and social value through movement, the video invites us to consider the ways in which maleness and concepts of productive and nonproductive labor are entangled, as they are registered within and expressed by the body. Forming the core of the video, this performative ensemble of Asian-American men is framed by sites in Flushing that range from characteristically dense and urban to uncannily barren, creating moments of slippage between these landscapes and film sites along the California railroad. Working through and with a range of cinematic references, Silent Spikes ​effects a collective investigation of the concomitance of the paradigm of masculinity with capitalist economic structures and the imperial impulse. 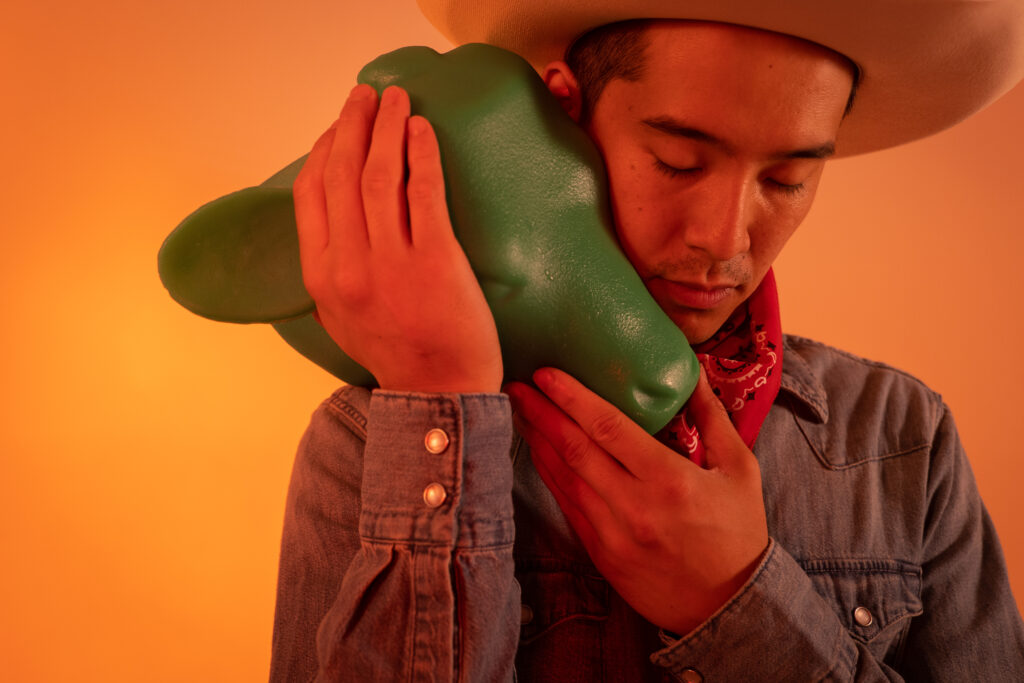